So you’ve watched the episode and hopefully have been thinking about it, and have been considering the main theme of the story of what being isolated does to us as humans. Perhaps you’ve acted on my kind action suggestion and have reached out to someone you see as being isolated. I’d be very pleased to hear of your experiences. 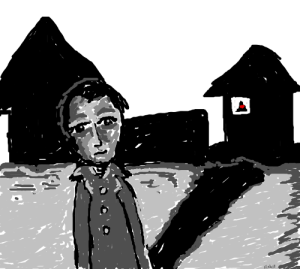 In terms of inspiration, I want to point you to a brilliant book written by a brilliant teacher, Vivian Paley. The book is called “You Can’t Say You Can’t Play,” the title taken from a rule she imposed on her kindergarten class one year. The book is Vivian’s telling of the what happened as she first contemplated, interviewed others about (including children in older classes), and then implemented the rule.

As you think about the challenges of isolation, think back to when you may have forced isolation on another. Have you ever used the “silent treatment,” or some form of it, to ignore someone with whom you were angry? If this question touches you in some way, maybe there is something kind you can do for anyone you’ve ever ignored in this way, even for just a minute.

Here’s a summary of “You Can’t Say You Can’t Play” for your further inspiration:

Who of us cannot remember the pain and humiliation of being rejected by our classmates? However thick-skinned or immune to such assaults we may become as adults, the memory of those early exclusions is as palpable to each of us today as it is common to human experience.

We remember the uncertainty of separating from our home and entering school as strangers and, more than the relief of making friends, we recall the cruel moments of our own isolation as well as those children we knew were destined to remain strangers.

In this book Vivian Paley employs a unique strategy to probe the moral dimensions of the classroom. She departs from her previous work by extending her analysis to children through the fifth grade, all the while weaving remarkable fairy tale into her narrative description.

Paley introduces a new rule-“You can’t say you can’t play”-to her kindergarten classroom and solicits the opinions of older children regarding the fairness of such a rule. We hear from those who are rejected as well as those who do the rejecting. One child, objecting to the rule, says, “It will be fairer, but how are we going to have any fun?” Another child defends the principle of classroom bosses as a more benign way of excluding the unwanted.

In a brilliant twist, Paley mixes fantasy and reality, and introduces a new voice into the debate: Magpie, a magical bird, who brings lonely people to a place where a full share of the sun is rightfully theirs. Myth and morality begin to proclaim the same message and the schoolhouse will be the crucible in which the new order is tried. A struggle ensues and even the Magpie stories cannot avoid the scrutiny of this merciless pack of social philosophers who will not be easily caught in a morality tale.

You Can’t Say You Can’t Play speaks to some of our most deeply held beliefs. Is exclusivity part of human nature? Can we legislate fairness and still nurture creativity and individuality? Can children be freed from the habit of rejection? These are some of the questions. The answers are to be found in the words of Paley’s schoolchildren and in the wisdom of their teacher who respectfully listens to them.